The Pets of Gold Miners 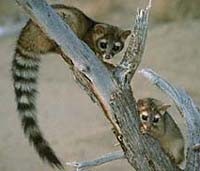 Have you ever heard of the ring-tailed cat?  In a recent piece by Esther Inglis-Arkell, this animal was featured – not because of its amazing tail, or its large, pouty eyes, but because of its relationship to the gold miners of yesteryear.

Though, today, many people are not familiar with this species, the article points out that it is far from extinct.  It makes its home in areas of Mexico and the southwestern United States.  They have even been seen in areas as far east as Louisiana.

In the days of the gold rush, the cats were living in abundance in the areas where men and women were forced to settle down.  Gold mining was profitable for some, but not as lucrative as others had hoped.  Thus, these men and women were not accustomed to many luxuries in life.  The ring-tailed cat was among the best they had, however.  They were considered a very valuable part of the family, as they did away with the pests that commonly raided the homes of the poor miners – rats, mice, and insects.

During the daytime hours, the cat slept – often in something as simple as a cardboard box set out on the porch.  Throughout the night, however, it was actively pursuing the unwanted inhabitants, which it saw as nothing more than a decent snack.

While Roaring Camp Gold cannot promise you a ring-tailed cat living in a box outside your cabin, we can give you a taste of what it was like to be a gold prospector in the days of old.  Don’t worry, you won’t have to contend with the mice or rats, so don’t feel obligated to bring your own ring-tailed friends along.  Our campgrounds are clean, inviting, and will provide many of the modern comforts.  The reliving of the past is found in the act of digging, panning, and discovering shimmering gold.